For I received from the Lord what I also handed on to you, that the Lord Jesus, on the night he was handed over, took bread, and, after he had given thanks, broke it and said, “This is my body that is for you. Do this in remembrance of me.” In the same way also the cup, after supper, saying, “This cup is the new covenant in my blood. Do this, as often as you drink it, in remembrance of me.” For as often as you eat this bread and drink the cup, you proclaim the death of the Lord until he comes.

Children who are already baptized and at least seven [7] years old are invited to come to the table of the Lord and receive the Body and Blood of the Lord for the first time.

Children gather with their catechists immediately after the 10:00 a.m. Mass for eight weeks in the late winter and early spring for about an hour each time.

Children and parents gather with their catechists one Saturday for several hours of immediate preparation for the celebration of their first eucharist. 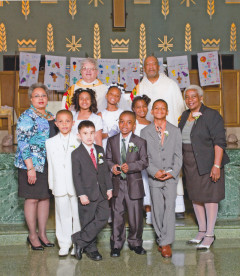 Receiving the Eucharist for the First Time

Children receive the eucharist for the first time on a Sunday during the Easter season.  The pastoral staff sets the date in the early fall of the year before the celebration.

The parish provides an official photographer who will take pictures during the celebration without distracting from the sacred events taking place. 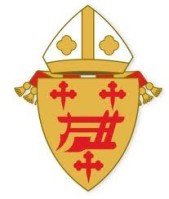